On March 19, 2011, more than 400 Ragon Institute employees, donors and collaborators gathered at the John F. Kennedy Presidential Library & Museum at Columbia Point, Quincy, Massachusetts to celebrate the two year anniversary of the founding of the Ragon Institute of MGH, MIT and Harvard.

The event was an opportunity to recognize how far we’ve come in only two short years and to convey the appreciation of the scientific community to Terry and Susan Ragon for their generosity, without which the Ragon Institute would not exist.

Guests were invited to tour the museum exhibits prior to the event and then join a cocktail reception. Many also signed up for this year’s AIDS Walk Boston to be held on June 5, an incredible opportunity to demonstrate or support and care for persons in the Boston area who are infected with HIV.

Dinner began with comments given by Dr. Bruce Walker, Dr. Peter Slavin, Dr. Susan Hockfield, Dr. David Golan and Dr. Laurie Glimcher. All recognized the unique collaborative environment of the Ragon Institute and the truly amazing results which have been evident in the last two years.

Dr. Bruce Walker, Director of the Ragon Institute started off the evening’s remarks by aptly quoting John F. Kennedy: “To those whom much is given, much is expected.” Dr. Walker observed that the visionary gift of the Ragons in this uncertain economic environment is opening up the opportunity for unparalleled scientific capabilities. It has already resulted in 40 new collaborations with scientists who had never previously worked in the field of HIV research, including economists who are using statistical methods to look at HIV and finding incredible vulnerabilities. Additionally, Dr. Dan Barouch has started clinical trials for a new vaccine this year and another vaccine trial is anticipated to launch next year.

Dr. Susan Hockfield, President of Massachusetts Institute of Technology noted the large number of young people in attendance at the event and observed that the power of the Ragon Institute is to attract young people who have an incredible desire to make a better world.  Previous generations have been called “Generation X” or “Y” but Dr. Hockfield calls this “Generation Why Not?” because of their eagerness to make a difference.

Next, Harvard Medical School Dean for Graduate Education, Dr. David Golan spoke.  He brought greetings from Jeffrey Flier, Dean of the Faculty of Medicine at Harvard University and Julio Frenk, Dean of Harvard School of Public Health.  He also noted that the power of the Ragon Institute lies in the new collaborations of scientists from seemingly disparate fields of study.  He observed that the Institute started with a big, new creative idea of collaboration and now it is and marshaling all available resources to follow wherever that idea it leads.

Since the recent earthquake and tsunami in Japan were on everyone’s minds, Dr. Laurie Glimcher, Professor of Medicine at Harvard Medical School and Ragon Institute Program Leader reflected on the helplessness that is often felt in the face of disaster.  She remembered that during the 1980’s there was a similar feeling of helplessness related to the new scourge of AIDS which was at the time compared to the black plague.  “We tell ourselves that we’ve done well in dealing with it,” she said, “but the truth is that in the developing world the tsunami of HIV still rages on.”  It could be easy to become overwhelmed again, she said, but the Ragon Institute is testimony that we don’t have to feel helpless.

She related that recently, while taking the Scientific Advisory Board photo, Terry Ragon leaned over and said to her, “This photo could be part of history.”  And that sentiment exemplifies the feelings of many persons at Ragon—that there is no place but Ragon where the generosity and passion exists to rid the world of this viral plague of AIDS.

View a gallery of the event 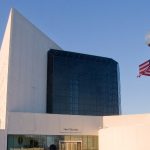 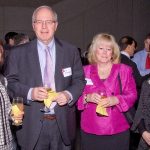 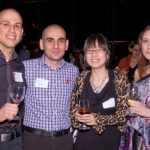 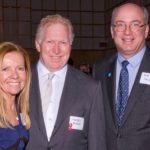 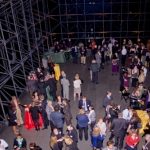 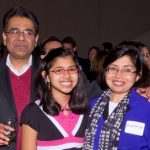 Dr. Arup Chakraborty (MIT) and his wife and daughter

A career spent following where the science leads has resulted in a “rather eclectic” research career for Dr. Laurie Glimcher and makes her especially suited to her role as a member of the Ragon Institute Steering Committee Member and Basic Immunology Program Leader.

Dr. Glimcher received her B.A. degree from Radcliffe College at Harvard in 1972 and her M.D. from Harvard Medical School in 1976.

She became fascinated with immunology while she was a first-year medical student at Harvard. “What always fascinated me was not so much treating patients with disease, but figuring out why they had the disease,” she says. As a result, she spent much of her elective time in Dr. Harvey Cantor’s lab at Harvard, working to identify a protein which would later become known as Nk1.

For her work, she received the Soma Weiss Award which she calls the “turning point” in her career. Not only was she the first woman to win the award, her father, Dr. Melvin Glimcher, former chief of Orthopedic Surgery at Massachusetts General Hospital, had won the award 26 years earlier. After a residency in internal medicine at the MGH, her postdoctoral training continued at the Laboratory of Immunology at the National Institute of Allergy and Infectious Diseases (NIAD) in Bethesda, a challenging and rewarding research environment.

In 1982, she returned to Harvard to do a clinical fellowship in Rheumatology at the MGH and start her own lab. “I had a hood and a small bench… I was really flying by the seat of my pants,” she recalls.

Following her instincts in research over the past 30 years has lead to positions such as Fellow of the American Academy of Arts and Sciences, a Member of the Institute of Medicine of the National Academy of Sciences, a Member of the National Academy of Sciences, former President of the American Association of Immunologists as well as positions on several advisory boards and on the Board of Directors of Brsitol-Myers Squibb. Additionally, she heads up her own 25-person laboratory in the Department of Immunology and Infectious Diseases at the Harvard School of Public Health.

The Glimcher laboratory uses biochemical and genetic approaches to clarify the molecular pathways that regulate CD4 T helper cell development and activation. The complex regulatory pathways governing T helper cell responses are critical for both the development of protective immunity and for the pathophysiologic immune responses underlying autoimmune and infectiousdiseases like HIV/AIDS. Additionally, Dr. Glimcher’s laboratory defined the genetic bases of both IL-4 and IFNg expression in T cells. Her group identified the proto-oncogene c-maf as the transcription factor responsible for Th2-specific IL-4 expression.

Subsequently, her group discovered the first Th1-specific transcription factor, T-bet and demonstrated that this single factor is a master-regulator of IFNg gene expression and the Th1 phenotype. Recent studies have demonstrated that T-bet controls Type 1 immunity in cells of both the adaptive and innate immune system. Her laboratory has focused on the function of T-bet in dendritic cells in mucosal immunity and tumorigenesis with an emphasis on inflammatory bowel disease.

She has expanded her interest in lineage commitment in lymphocytes to the B cell with the discovery of a transcription factor, XBP-1 that controls plasma cell differentiation and the Endoplasmic Reticulum Stress Response. Her laboratory has provided evidence for a link between ER stress and proinflammatory/mautoimune diseases.

Skeletal biology is a separate interest of the Glimcher laboratory arising from her discovery of a novel protein Schnurri-3 that controls adult bone formation. Large scale screens have identified new proteins that control osteoblast and osteoclast commitment and activation in skeletal biology.

A Passion for Mentorship

Dr. Glimcher has never forgotten the struggle of those early years of residency and research. As a result, mentorship is a priority for her.

“At the time [I began as a investigator], there were few immunologists at MGH who could provide intellectual mentorship. I’ve tried hard to not have that happen to the people I train,” she says. “I want to make their transition from postdoc to faculty a much more mentored and supported road.”

Women in science are a special passion of hers since much of Dr. Glimcher’s professional success was accomplished concurrently with raising a family. Her first child was born within a month of arriving as a fellow at the NIH and her second child was born six months before she started as an independent investigator at Harvard. These were challenging years working to balance personal and professional life. Dr. Glimcher observed similar pressures on her own women post-docs and fellows. As a result, Glimcher launched the Primary Caregivers Technical Assistance Program at the National Institutes of Health (NIH). Through this program, the INIAD grants funds to selected fellows to hire a technician to help them carry out experiments in order to be able to compete with their peers without young children at home. “In research you have to stay at the forefront of the scientific world,” Glimcher said. “To me, being a mother of three childrenwas always just as important.”

Her advice to young scientists is be a risk taker and don’t be afraid to try new things. “You have to be willing to ask the experts for their help. Do lots of reading. Go to meetings. Make the leap.”

A Commitment to Lineage

On April 15, the Harvard School of Public Health is honoring Dr. Glimcher with a symposium entitled A Commitment to Lineage: Laurie Glimcher’s 30 Years in Science. This symposium celebrates Dr. Glimcher’s three decades of following where the science leads

In Loving Memory of Penny Campbell

On March 18th the MGH and the Ragon Institute lost a dedicated employee and loyal friend to cancer.

Penny Campbell, Administrative Manager at the Ragon Institute, battled incredibly hard and courageously for the past two years against a type of cancer for which effective treatments are yet to be developed. Penny was a faithful grant administrator to Dr. Bruce Walker for over 8 years at the Partners AIDS Research Center/Ragon Institute. Before that, she worked at the MGH Center for Integration of Medicine and Innovative Technology, Chart House and Polaroid Exhibits.

Her straight talk, feistiness and sense of humor, along with her hard work and dedication, will be missed by all at the Ragon Institute.