The Ragon Institute has been established in their new space 400 Tech Square, Cambridge for several months now and researchers and staff are settling in and enjoying the spacious modern facilities.

One of the primary purposes of moving to a larger space was that it would allow Ragon to increase its laboratory resources.  In the last few months, we have added many pieces of research equipment and, for the first time, have established a our own BL3 laboratory, thereby expanding our research capabilities. Since 2003, Ragon has housed a Flow Cytometry and Microscopy lab, offering researchers different ways to visualize specific parts of cells and tissues by the use of florescent dyes.  New equipment added over the years, expanded imaging capabilities to create three-dimensional reconstructions of cells and to capture video of the interactions of cells in culture.

The newly installed Imagestream X Mark II Imaging Cytometer combines the high-data content of microscopy with the high throughput of flow cytometry, capturing images of each particle in multiple channels.  Capable of analyzing 5,000 cells per second in up to 12 channels, the Imagestream allows rapid, real-time plotting and graphical analysis.

With sample volumes of 20-200, the Mark II increases productivity of lab staff and decreases wait time for equipment.  It also allows uses 95% of each sample, significantly reducing waste.

The Ragon Institute has also purchased and installed a CyTOF Mass Spectrometer, the cutting edge of mass spectrometry, thereby providing more information per cell than ever before.

Mass cytometry is a rising technology that merges flow cytometry, which analyzes single cells, and mass spectrometry, which determines the mass of elements. Like classical flow cytometry, CyTOF analyzes one cell at a time for the expression of certain proteins, but these proteins are marked with antibodies bearing metal elements, instead of fluorescent dyes. Thus different proteins of a cell are tagged with different metals and their mass-differences can then be distinguished by the very sensitive mass spectrometry technology. As a result, up to 40 proteins can be distinguished.

The Ragon Institute also eagerly anticipates the lockdown of the Biosafety Level 3 (BL3) Core Facility, located within the new building.  Final testing and regulatory approval are pending, after which time, the lab will be fully operational.

A BL3 laboratory provides a higher level of security than other types of labs, and is specially designed to handle pathogens, such as tuberculosis (TB).  These laboratories feature a filtered exhaust air system, balanced ventilation to provide directional airflow into the room, and restricted access.  All procedures involving the manipulation of infectious materials are conducted within biological safety cabinets, and specially designed hoods.  Laboratory personnel entering the room must wear appropriate personal protective clothing and equipment.

With the new BL3 lab, researchers will have the ability to study TB in conjunction with HIV, as these infections often work hand in hand with each other.

Ragon researchers eagerly anticipate each of these new resources which will hopefully speed research toward a vaccine for HIV/AIDS and other infectious disease.

On January 25, Ragon faculty and staff, along with their families and friends, got their first look at the new Ragon home during an open house event. Attendees were given tours of the still-empty office and lab space and appreciated the incredible view of Cambridge from the 8th floor. Everyone enjoyed cocktails and hors d’oeuvres in the first floor reception area or music from the deejay, who set up in front of the floor-to-ceiling windows of the 7th floor tea room.

The event also served to commemorate the Ragon Institute’s 4th year of scientific achievement and discovery, and as the evening wore on, everyone reflected upon how far we had come and how much more progress there is still to be made.

The official dedication of the new facility was held on March 11, with Ragon Institute donors and friends, as well as the leaders of MGH, MIT and Harvard in attendance.

The keynote address by Anthony S. Fauci, MD, director of the National Institutes of Allergy and Infectious Diseases, highlighted the progress made in the field of HIV/AIDS research over the last 30 years. Terry and Susan Ragon also spoke about the desire to give back which motivated them to contribute so substantially to the field of AIDS research and, by extension, to impact all infectious diseases which plague developing countries.

The dedication coincided with the Scientific Advisory Board meeting, enabling board members to attend the event, tour the new facility and express their appreciation for the philanthropic support which enabled this step forward.

In appreciation for the years of support by the Schwartz family, on April 10th, Ragon faculty, staff and collaborators gathered in the Ragon auditorium to re-name it “The Mark and Lisa Schwartz Auditorium.”

In 2003, Mark and Lisa Schwartz provided the seed funding for an anti retroviral drug program which eventually became a template for the country-wide rollout plan in South Africa and led to a 22 million grant from the Gates Foundation which established the first AIDS research facility on the ground in South Africa.

In his comments, Ragon Institute Director, Dr. Bruce Walker, observed that the Schwartz’ did more than give money to a cause, they became fully engaged in the strategic mission of the Partners AIDS Research Center (PARC), now the Ragon Institute, “giving us license to think bigger.”

Mark and Lisa Schwartz spoke, sometimes with emotion, about the gratification they felt at being able to be see for themselves, the impact of their involvement: to visit patients whose lives had been saved because of the funds they had contributed.

As we settle into our new facility, the Ragon Institute would like to sincerely thank the generosity of spirit of all our funders, without whom this move and these successes would not be possible.

View a gallery of images of the events 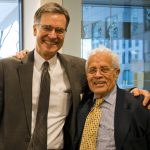 Dr. Bruce Walker and Eric Mayer at the the Ragon Open House 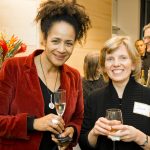 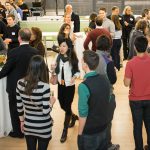 The crowd at the Ragon Open House 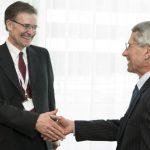 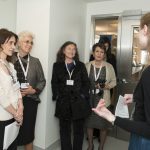 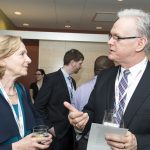 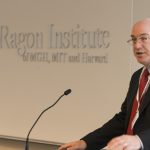 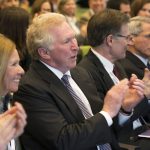 Susan and Terry Ragon at the building dedication event 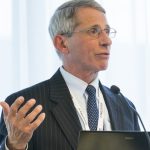 Dr. Anthony Fauci gives the keynote address at the dedication 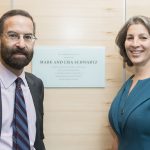 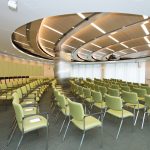 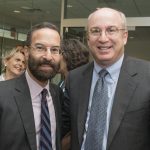 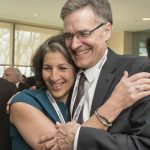 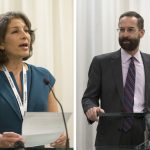 Lisa and Mark Schwartz speaking during the dedication program 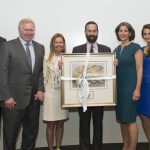